Wednesday 9th November saw indie rock band Catfish and the Bottlemen take to the stage to play the first of three dates at Victoria Warehouse in Manchester. 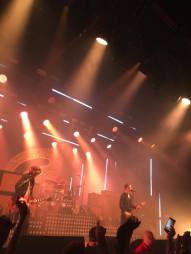 If this band’s name means nothing to you, you’ve most likely been living under a rock for the last two years. The Llandudno four-piece formed in 2007, and after releasing their debut album – The Balcony – in 2014 their following has grown massively. Earlier this year they released their second album The Ride, and have since played festivals such as T in The Park, Boardmasters and Y Not, playing numerous other gigs across the UK and America.

As they took to the stage accompanied The Beatles’ track Helter Skelter and flashing lights, the atmosphere blew up. The crowd were hyped, and the band went straight into tracks Homesick and Kathleen, doing their usual extended version of the opener. Next up was Soundcheck; the first single from their second album, Van McCann belted out lyrics “Maybe I don’t act the way I used to ’cause I don’t feel the same about you.” with fans eagerly singing the lyrics back. Oh, and of course they went nuts for Bondy’s guitar solo.

One thing I’ve always enjoyed about a Catfish gig is the energy, and it certainly didn’t falter at any point of the evening. Pacifier, Business, Anything and Red came on, keeping the crowd engaged and excited. With their impeccable stage presence, the quartets audience interaction was one rarely to be experienced. Everyone was mad for them.

Saving the bands slowest track for towards the end, McCann performed Hourglass, giving us an opportunity to hear his raw vocals. Once the song came to a close, it was followed by the familiar opening to Fallout. At McCanns request, a vast majority climbed on a mates shoulders for this track, which only heightened the loud, animated atmosphere.

We were of course treated to other tracks from The Ride over the course of the night…Oxygen, Postpone, Outside… and 7, the one which particularly got to me. I saw them perform this at Exeter Hall in 2015 for the first time, with nobody knowing it, and being able to compare it to their performance of it now, it only proved that the crowds presence and interactivity is just as important as the bands.

Leaving out an encore, Cocoon and Tyrants marked the finale of the band’s set; but they kept the vibrant energy going through to the finish. Prolonging Tyrants with an extended instrumental which only kept the crowd going. Surrounding me were people on shoulders, singing to each other and even one or two crowd surfers; these final tracks only emphasised how much music brings people together.

Many said that the bands second album was just the same as The Balcony. Whether or not this is true, they’ve written a setlist of tracks which keep the crowd elevated and interactive. As one of the biggest indie-rock bands in the UK at this time, their following is only growing bigger… I don’t see it being long before they’re selling out Stadiums.