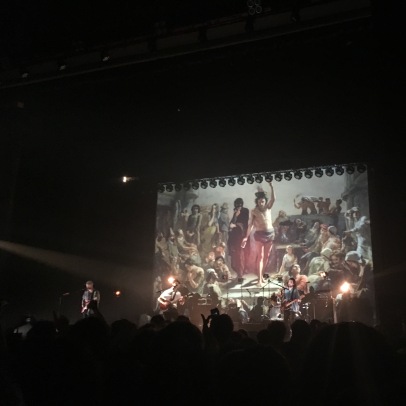 The man himself has finally resurrected after having dropped his fourth album in 2016 ‘Trick’. The Londoner, Jamie T is back and better than ever with producing a 12 song album which has a variety of tunes to fit everybody’s taste. Although it has a different twist to his previous releases, it consists of upbeat songs like ‘Robin Hood’ in contrast with much slower songs such as ‘Self Esteem’ but he has still managed to capture meaning and enables his audience to listen to this powerful album whilst expressing their emotions and understanding behind the lyrics. He is a powerful and creative individual who produces music as it is a way of escaping reality and expressing himself dismissing impediments.

Beginning with the opening song ‘Tinfoil Boy’ is an interesting starting point as it was his first single from the album which he released earlier in 2016. It is a completely different style that Jamie T has portrayed when singing as the intro features monologue from Florence Bell which creates a curious insight to what the song has to offer.

This song was inspired by Rage Against The Machine’s aggressive tone to allow Jamie to display a different but meaningful song. This song purely focuses around the anger that is inside him and relates to the random outbursts of pain and emotion which happen in reality.

Moving on to the next track which is known as ‘Drone Strike’ immediately introduces the scene as drone operators engage in a conversation which makes people want to listen on due to the intriguing difference instead of Jamie T himself beginning the song. Suddenly he interacts with the song and continues verse 1 in his unique style of singing.

It could be seen that it is a fairly demanding and hard-hitting song, the sudden change in volume demonstrates a softer side which is calmer and makes it seem overwhelmingly meaningful instead of trying to get the point across.

Track 3 being ‘Power Over Men’ was another single which he released earlier in the year which presented a taster for the album. Again, it begins with whispering from the Actress Florence Bell which reflects upon the song being about a woman empowering a male.

The song focuses on anxiety which is present between the two figures spoke about in the song and the potential build-up of events when being approached. It could replicate his personal experiences and how he felt in these situations and the idea of feeling anxious and weak. The lyrics ‘She had power over men’ are repeated frequently throughout the song which indicate the lack of control the male has in whatever circumstances involving a female.

The combination of upbeat and slow creates a catchy and addictive song which also demonstrates the oxymoron of anxiety next to a bouncy melody as you wouldn’t put the two together. The rhythm of the song flows as it tells the story which makes it easier for everybody to recognise and demonstrates an interesting and excellent tune.

As you can tell from the first few songs that this album is going to truly win everybody over as it is just so good. I think all the songs are fantastic and unique in their own way despite being quite similar.

One of my favourite song on the album has to be ‘Joan Of Arc’ as this melody is catchy and doesn’t just involve the typical Jamie T singing but includes the vocals which complete the song. Another song is ‘Self Esteem’ as you see a different side to Jamie which evidences his talent having a wide range. It is a slow and sad song which could be very relatable for some people. It seems like a personal song towards him and it is a meaningful and deep finish to the album. I love how the album begins with a mysterious track and ends with a powerful one as if the mystery is solved and the true Jamie is revealed.

I do think this album is different to his others but that allows me to be intrigued in what Jamie might produce in the future. Some people believe that as an artist releases more albums, you cannot really compete with the first but personally, I think this album is heartening and deserves more recognition.

His talent has grown from back when he was an urban youth, he has become extremely talented and successful over the years. I love how his albums consist of something he has suffered with and it is inspirational to see where he is now after the things he has experienced in life such as panic attacks and anxiety which allows many people to relate to him and want to find the confidence to overcome the obstacles and make something of their lives. Jamie is an individual that stands out as he truly has a talent for connecting with his audience and should continue to produce such great music to make a difference in the music industry.

This is an album which definitely deserves more than 14th place on NME’s list of Albums of the Year 2016!