Having already played multiple shows around Leeds and got some sweet stuff recorded, lad band Muffin are in the middle of working their way higher up the Leeds music scene. Their fresh track, ‘Dinosaur’, is the perfect listen if you want a taste of what Muffin have to offer.

As soon as you hit the play button, an infectious guitar shred penetrates your ears that is soon followed by the explosive voice of frontman, Matt Bond. Already in the first 30 seconds of the track, it is clear that this is a song of rebellion and protest with the lyrics ‘he’ll sell you lies, he’ll plagiarize// and rip your soul away’ foregrounding its anarchy feel. As their track progresses, the band really come together with some addictive guitar riffs, rebellious bass strings and the driving drum rhythms that lend to the power of the song and it’s lyrics. This isn’t one of them song that’s too ‘in your face’, yet Muffin still manage to create the perfect mix to get across their F**k you attitude.

Matt told us the meaning behind the song saying: “The song was written in the final stages of the US Presidential Election Campaigns, and its focal point is effectively a ‘highlighting’ of all the ways Donald Trump is tyrannical lunatic. So for the purpose of the song, he’s the Dinosaur, attempting to exert power over and dominate those weaker than him, but as a collective, there is a great deal of protest to his ideologies and that regardless of the result, he’d never be looked up to as leader (“King of What? F**k All!”)” 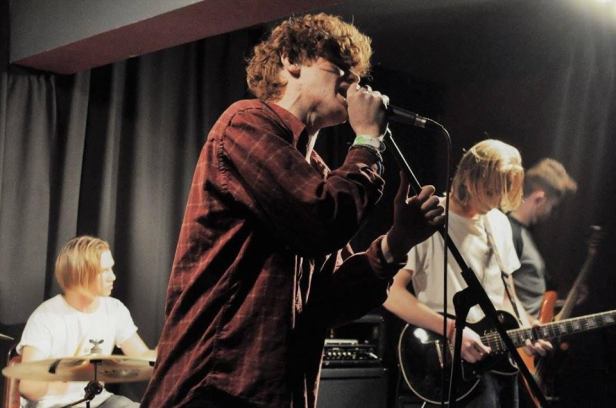 Calling themselves a ‘grungegaze’ band- a mixture of shoe gaze and grunge- Muffin are certainly bring breath of fresh air to the music scene with their tunes having a mixture of grungy/ punk sounds. The band are ones to catch while you can; get over to Santiago Bar on the 9th of May to check out their single launch of Dinosaur, or alternatively you can catch them play The Leading Room on the 30th of May. Oh, and did I forget to mention that they bring free muffins to their gigs? Whats not to love?